After thinking about what mechanic would work best with the Battle For Souls theme in a board game format I have come to the conclusion that worker placement would be best.

While the mechanic has been used quite extensively, there are some changes I can make to keep it interesting while providing the tension required for a "battle".

I would commission a grand piece of art for the game board that shows humankind struggling with various choices. Players would place guardian angels or demons (workers) to collect virtuous deeds or sins. There would be seven different colors to represent the seven deadly sins and seven heavenly virtues just like in the card game.

For example, a soldier capturing a prisoner of war could be where a player places an angel/demon to collect a red virtue/sin cube that represents the choice of the soldier.

Soul cards would be laid on the board in groups of three like in the card game, but they would have 3 to 4  places to place cubes collected by the players. A player would need to claim a soul by placing a meeple on it, place the correct color cubes on the card and then place another meeple to reap the soul.
So to claim a soul you need to give up a meeple until the soul is reaped. The souls will have spots for cubes on the side of light and the side of darkness. An opposing player can still place cubes on the soul once you claim it. If the other side can fill up all of their cube spots on a soul it goes to purgatory when reaped. This will provide a mechanic for direct conflict over the souls, which I feel is important to support the them.

Players will also be able to instigate major and minor earth event. Major events once played become another space for all player to play on, awarding the player and the owner of the card.

The idea behind the events is that they provide great opportunity to bring out the best or the worst in mankind. Here are some examples of major events: 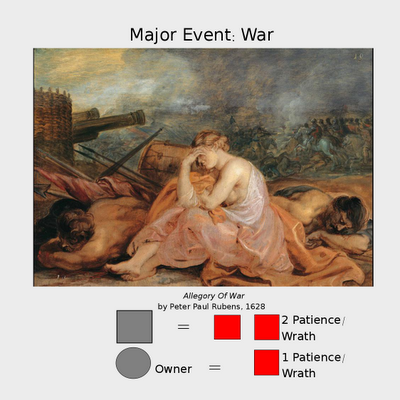 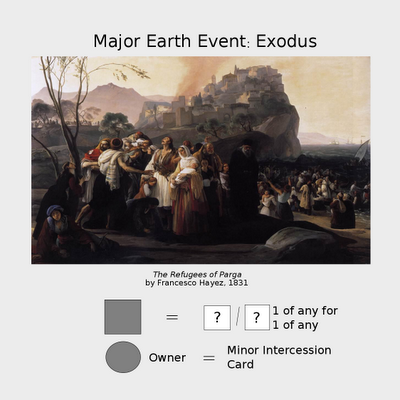 Posted by Robert Burke at 4:59 AM 0 comments