The third game in the Robert Burke Games collection, Battle For Souls, has broken through it's third stretch goal on Kickstarter and is picking up momentum in the last 35 hours of the campaign.

The first stretch goal was reached at $28k and will upgrade the box to extra thick cardboard and a linen finish.

The project is now closing in on its fourth stretch goal, which will upgrade all the cards in the game to super high quality blackcore stock and a linen finish.

If the project can reach $40k an expansion will be added for all Kickstarter backers. 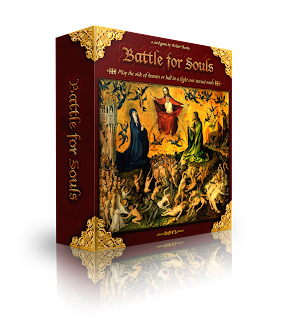 Battle For Souls is an epic medieval card and dice game for 1 to 4 people ages 13 and up. The game allows players to choose the side of heaven or hell in a fight over the immortal souls of humankind.
The side of darkness can coax souls to hell by playing Temptation, Sin, Devil and Unholy Relic cards, while the side of light can help souls to heaven by playing Virtue, Intercession, Archangel and Holy Relic cards. Souls are worth victory points and when the last soul is reaped, the player with the most victory points wins.
Battle For Souls features an 8-step turn order, and a unique hand reward system that allows players to influence the moral decisions of man.