Sorry, No Dice: The evolution of a combat mechanic 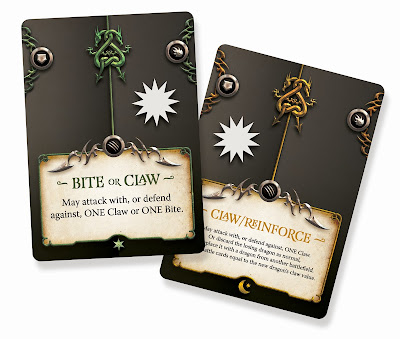 Draco Magi started life as a abstract strategy game. It was simple, but took concentration to be successful. I thought it was good to go. That is until designer Richard Launius played it with me.

I'll never forget what he said,"Robert, this is a solid game, but it doesn't feel like dragons fighting".

Yep, I knew he was right.

I was guilty of something I tend to dislike in games I play, a pasted-on theme -- and I knew it. It took a wise comment from the master of sprawling thematic games to make sure I didn't just sweep it under the rug. Richard said he had some ideas, so I gave him a prototype to take home. From that day forward Draco Magi would be designed by both of us. Richard always opting for deep thematic play, while I made sure we did not lose hold of the strategic elements that gave birth to the game.

Richard came back rather quickly with a redesigned game that included dice. Our playtesters loved the dice for the ranged attacks, but there was no "wow factor" during the melee attacks, which took longer to resolve. As a designer, I'm not against dice, but the melee did indeed feel too "random". So it was back to the drawing board.

Richard let me know he had been testing a new battle system with cards, and that it would be perfect for Draco Magi. So a short time later he sent me a prototype and a set of rules in the mail. In this version, players drew from a "battle deck". They would draw cards equal to attack values on the dragons they had in the fight.

This worked much better, and our playtest  groups liked it a lot more. But after many plays it was clear the melee battles were not quite there yet. The ranged attacks were fast, and the cards worked perfectly, but the melee battle still didn't have that "spark" designers are looking for.

The melee portion of the cards (bottom half) included, "Claw", "Bite", "Magic", Claw X2" and "Flight". The better you placed your dragons, the better your melee advantage. This was good. Once the battle began you would play a card, and your opponent would have to defend with the same type of card, or a Flight. If you could not defend, you would lose a dragon on the battlefield.

It was clear this had fantastic possibilities, but it needed more.

How could we make the melee feel more like fighting? After thinking on this for a couple weeks I came up with two additions that would end up making the combat system something we were really excited about.

1. Deckbuilding - I asked Richard, "What if we had a third deck of slightly more powerful cards that allowed players to build their battle decks?" He loved the idea and broke the single battle deck into identical player decks, one deck for each side. He also took a first stab at the "advanced battle deck" cards.  Players draft a couple cards from the advanced battle deck at the beginning of the game, but would have opportunities to earn more through gameplay. This deck was the hardest to balance, with both Richard and I adding, editing and subtracting cards, and testing every change out with our two different playtesting groups. Once we had the balance right, the feedback was passionate excitement. We were on the right track.

But I had another idea I wanted to try, even though I knew it would mean months more of development and testing.

2. Combos - What if instead of playing just one card per turn during melee, a player could play multiple cards? As we started to fool with this, the dynamic changed, and much more strategy and subtly was introduced during the melee phase.  We added symbols (Sun, Moon, Star) to the bottom of the battle cards. You could play as many cards on a single turn as you wished as long as they had matching symbols. Your opponent would need to defend against all of them, or lose a dragon for each attack undefended. But there is a bit of risk here, your opponent could defend your combo attack with a single Flight card. This would mean you just burnt more battle cards than your opponent. Not good for you. The subtle deduction part of this mechanic however, is that each player only starts with two Flight cards, with a possibility to gain up to two more from the advanced battle deck. So as your opponent burns Flight cards, the risk involved with playing a combo drops. This makes for a wonderful cat and mouse battle  that is highly thematic.

The combos were awesome, but we have since added more cards that make them even better. We think the balance is just about right.

So the battle cards resolve both ranged and melee combat,  enable subtle trickery, require deduction,  introduce powerful combos, and players can build their battle decks through drafting and gameplay.

We think this is better than dice as players can tailor their decks, and use information to dramatically improve their odds in battle. While the excitement of a random element is still there, it gives players real control over their destinies.

So sorry, no dice.

Posted by Robert Burke at 5:33 AM 3 comments