How a poorly worded prototype card led to an improved mechanic 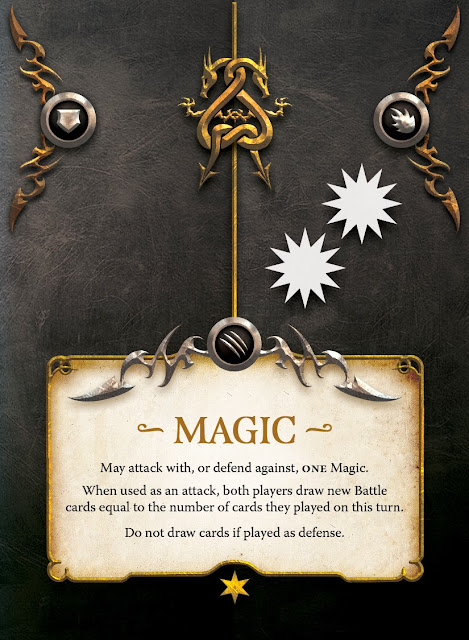 You see, there's a subtle little melee battle mechanic that I'm really proud of, and I had planned to just pretend it was a brilliant idea, but I just can't live the lie.

In Draco Magi melee battles between dragons are resolved with the melee section of the battle cards. The cards include attacks like "Claw", "Bite", "Claw X2" and "Magic". When Richard Launius first presented the battle deck idea in a rough prototype form it did not have combo abilities, so only one card was played at a time. If you played a "Claw" for example, your opponent would need to defend with a "Claw". One of Richard's original battle cards, "Magic Attack" was especially interesting. Your opponent would need to defend with a "Magic, but both players would get to draw a new card to add to their hand. This helped give players the feeling of having a chance if they were short on defenses.

If the defending player countered a magic attack with their own magic card, players would not draw yet another battle card, so we wrote this on the card to make it clear.

Well, as the game developed we added combos which dramatically improved the game play, and we saw an opportunity to take the magic attack card to a new level. Instead of having each player draw one card, we would allow them to draw cards equal to the number of cards they played on the turn.

So, if player one played a combo of "Claw, Claw, Bite, and Magic" she would draw 4 new cards. The defender is now faced with a more interesting choice. If there was no Magic card included in the combo, the defender would certainly play a "Flight" card to defend if available. This would mean the attacker burned 4 cards to the defender's 1 card. And getting a leg up on your card count is the surest way to win a battlefield. However, when a "Magic" card is included in a combo, the defender needs to think twice about playing a "Flight" as a defense, because in this case the attacker would get 4 new battle cards, while the defender would only get 1 since again, the number you are allowed to draw is tied directly to how many cards you play.

This made the decision points around when to play a magic attack a lot more interesting! But we still needed to make it clear that players only draw cards on a magic attack, not a magic defense. So in our example, if the attacker plays a "Claw, Claw, Bite, and Magic" and the defender plays a "Claw, Claw, Bite, and Magic", each player would draw only 4 cards, not 8. This is clearly a better choice for the defender than playing a "Flight" since the defender can at least stay even on the card count.

So the image you see at the top of this post is the prototype card we created after making these changes.

The "problem" on this updated Magic card was the last sentence: "Do not draw cards if played as a defense." What we intended was that players do not draw a SECOND round of cards when a "Magic" is played as a defense, but rather only when played as an attack. However, because of the way it was worded (poorly), play testers thought that the defender could not draw ANY cards if they played a "Magic" in defense.

Instead of correcting this, I let the game play this way for a bit, and I discovered that this mistake was a GREAT one. Making this "mistake" part of the ruleset made the melee better! Now when someone plays a combo with a magic card, you really have to think about defending that magic with a magic. In most cases (where you have more than 1 dragon on the battlefield) it's better to match the non-magic cards and lose a dragon to the magic attack, while holding your magic card for your next attack in order to catch up on your card count. If you get too behind in cards you'll have no chance, so sacrificing a dragon to hold that magic card can now be a good strategic decision. In addition, it gave players a deadly finishing move option, and also made thematic sense. If you are attacking with magic it imbues your dragons with more power. However, if you are forced to use magic to defend, your focus must be 100% on the counter spell.

Because of our poorly worded prototype card, decisions around magic attacks took on much more weight and importance.

So while I'd love to claim the idea as our own, I can't.  It was a mistake, a very lucky and remarkable mistake.