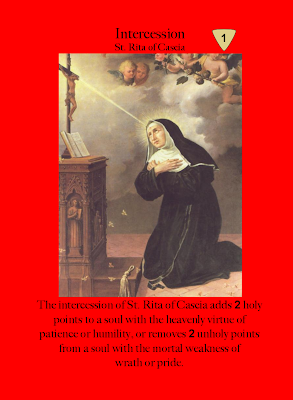 Another option that players have in Battle For Souls is the purchase of Sin/Intercession cards. These cost 2 holy/unholy points and can be purchased after a player draws up to their 5 card limit. I am also considering allowing a free draw with some combination of cards (maybe a full house or 4 of a kind?).

There are two types of Sin/Temptation cards. The first type is worth 1 victory point, but the card also has a color that can be used to bring a player's hand to 6. These cards also have a special ability to add or subtract 2 holy/unholy points at the player's choice from multiple mortal weaknesses, heavenly virtues. A colored Sin/Intercession card can only be used on the current turn. In the case of the saints the cards are in synch with the spiritual path that each saint took in real life.

So for example, let's say my hand is two pair (orange and yellow) plus one green card and unfortunately, these colors do not match any of the souls in play. I can choose to pay 2 holy points for an Intercession card, which will add another card to my hand. If the card is St. Rita I would then have red in my hand as well. So for example, if one of the souls in play had the heavenly virtue of Patience I would play Rita with two different colors from my hand to gain one holy point on the red soul. I could then add 2 more holy points with Rita's special ability to this soul. These cards can only be played when drawn -- they are "use it, or lose it". After playing this hand Rita would have to be discarded to the player's private victory point pile to have the card's victory point counted at the end of the game, whether or not the card was used. 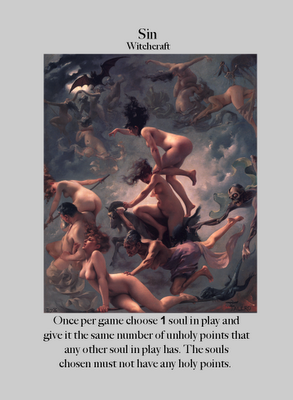 The second type of Sin/Intercession card is identified by its gray color, and these are not worth a victory point and cannot be used as a color to improve a player's hand. However, there is a trade off -- the player can choose to play the card's special ability immediately, or put it face up on their tableau for a future turn.

So gray Sin/Intercession cards can only be used once, but the player can hold onto it and play it on any turn they choose as opposed to the colored cards, which must be played on the same turn.
Posted by Robert Burke at 4:35 AM