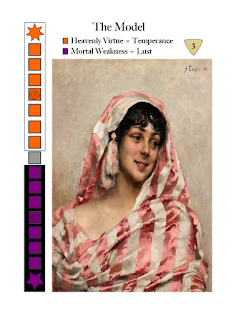 The 21 souls in the game all have a scoring track on the left had side of the card face.

Each of them has a mortal weakness that corresponds to one of the 7 deadly sins, and a heavenly virtue for one of the 7 virtues.

There will always be three souls in play in the center of the table that players battle over. When new souls are placed on the table a marker is set in the middle of the scoring track. The starting position is always the grey space representing the neutrality of the soul.

As holy points are added, the marker is moved up the track, as unholy points are added the marker is moved down the track. Depending on where the marker is when a soul dies determines whether the soul goes to heaven or hell, earning victory points for the side of good or evil respectively. Souls die when a reap card is played or when a special ability to reap is used.
Reap cards are drawn randomly and a player must decide if it is beneficial for them to reap the souls now, or wait for a later turn.

On each soul card track you will see a spiral four spaces up and four spaces down. This represents the amount of holiness or unholiness a soul must have to be taken to heaven or hell. If a soul is reaped while the holiness marker is in between these two spirals the soul is placed in purgatory, and neither side gets the points.

The very last spaces on the holiness track are a 7-pointed star and a 5-pointed pentagram. If a player on the side of good can get a holiness marker to the 7-pointed star the soul has reached sainthood and is taken immediately to heaven without dying (no reap needed). When this happens the player is also allowed to draw a new angel card at random and add it to his or her arsenal for the remainder of the game. If a player on the side of evil earns enough unholy points to reach the pentagram the soul goes straight to hell and the player is allowed to draw a new devil card.

When the reap card is played all three souls in play must be resolved based on where the holiness marker is on each. So each will either go to heaven, hell, or purgatory. Then, three new soul cards are put into play, each starting with the holiness marker on the gray space.

This battle over souls is the ultimate goal of the game and can be a real tug fest between the forces of good and evil. Right now I have rules on how holy and unholy points will be gained and playtesting will be starting soon. I will write down my ideas and playtest results here as we work to balance the game. Input is greatly appreciated!

Artwork is in the public domain:
"Laughing Model With A Cloth" by Albert Edelfelt - 1880
Posted by Robert Burke at 4:45 AM